The VW up! What comes to your mind when you hear these words? Well for me, I was like: “Whaaat? What’s that?”. My knowledge for the Volkswagen brand may not be ‘up’ to par but when Stream Line discovered Thiren Naicker and his offering to the VDub world I knew that my camera would drool for a feature. I quickly sought out Google to learn more on the car. The standard VW up! was child’s play compared to the vision that Thiren had applied. 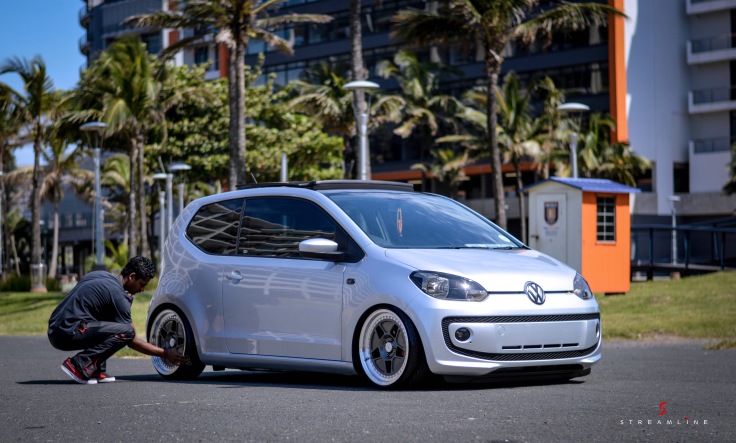 I have to admit I was drooling as I approached the car at our designated photoshoot venue. I was rather taken aback and completely amazed by seeing a different from the norm type of car being customised and modded. Don’t get me wrong, I appreciate all modified cars but when you come across something with so much uniqueness, you tend to appreciate it a little more. Purchased 10 months ago, being one of the first VW up! owners in the city, Thiren picked it up for a whopping R150 000. Being a part of the Volkswagen Club of South Africa (VWCSA), inspired him to take on this build and make his mark out there.

He went for a simple yet classy approach with just the right type of customising. At the rear a Polo GTi diffuser and tailpipe was added, protective headlight tint applied, with the badges dipped in black. This gave it that unique touch.

According to Thiren, it is South Africa’s first slammed VW up! which rides on FK coilovers that he had imported. His car is just a few mm of the ground. Being his forth set of rim fitted, he recently purchased a set of 17” fifteen52 R34 studded replicas and wrapped them with 185/35/17 Nankang tyres from Hannaford Mag & Tyres.

Powered by a 1-litre, 3-cylinder petrol engine the up! delivers 55kW and 95Nm of torque while fuel consumption is claimed to sit at 4.7-litres/100km. The VW up! features a front wheel drive and 5-speed manual gearbox for the utmost driving pleasure.

Thiren did not intend to throw in a sound system that will blow the back glass away, he opted for a subtle 10” MTX Subwoofer – for that very low bass frequencies, a set of Pioneer tweeters and mids, a 1000W MTX amplifier, all driven by an Alpine MP3 head unit. 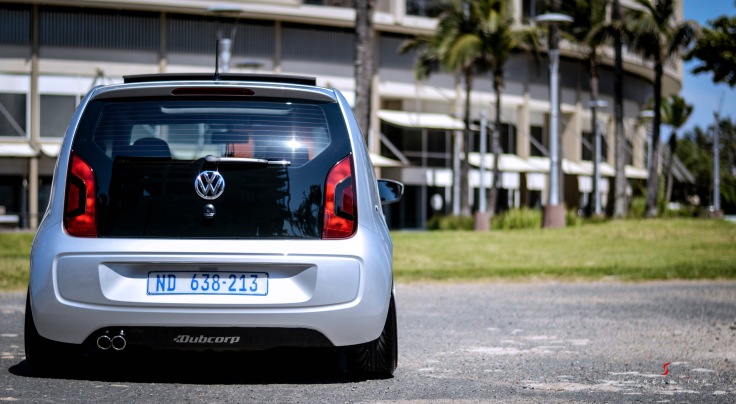 Thiren says that his future plans are to: “dip the car, take out the coilovers and install some bags”. We look forward to seeing what he does next. Until then, he definitely deserves a pat on the back.